Worklist:
Progress fitting of new loom socket and associated rewiring.
A full house today and some explaining required to bring Laurence up to speed on the loom modifications to accommodate the servo operated magnets.
The 20-way socket and associated connector block were moved to make way for the new 12-way socket (Green one in the middle) and a new 12-way connector block fitted below it to terminate connections. Some of the 3-core servo cables may need to be extended to ease congestion. Some of the new wires to this socket will come from the control panel to operate the 4 new uncouplers and future servo operated features/accessories on the two boards. The latter includes an opening door and possibly a simple crane. Others wires will connect those servos to the Servo Controller Board (SCB) on the engine shed board. There is capacity for more items, if required. 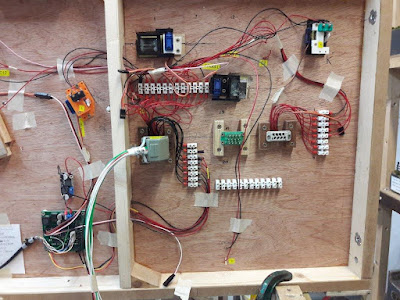 Until now, there was only a 12v DC supply provided to these boards, which directly fed the SCB. However, all other boards on Worton Court had a 19v DC supply for ALL accessories and lighting. The first job was the removal of the dedicated 12v voltage regulator in the control panel (the bottom of the two units seen below) to feed 19v to the new boards. The second job was the fitting of a dedicated voltage regulator next to the SCB set to 12v. 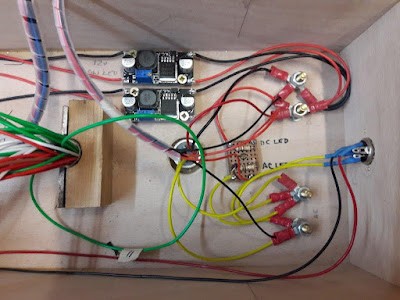 Returning to the boards, wires for the new magnet servos were fitted between the socket and connector block. As well as 3 on-board wires from the SCB to each servo, signal wires are required from the control panel to the SCB to activate the servos. Furthermore, the servos on the Masons boards require signal wires from the control panel to the SCB and then operating wires through the loom to the Masons board. Using servos certainly increases the complexity of the wiring! 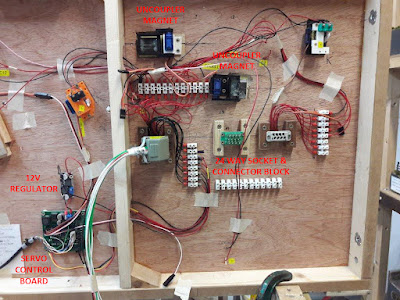 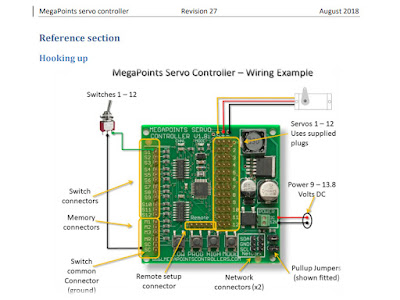 The servo's are 'trimmed' using a small plug-in (remote) device.
Geoff had redesigned the servo mount to include oval fixing holes to allow for alignment adjustment and to accommodate a 'small protrusion' on the servo casing that made the unit unstable. All resolved now. 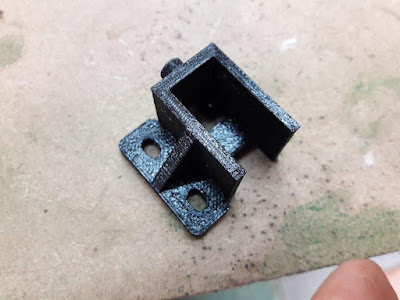 Another session that resulted in some aching heads, but progress is being made.